The tree data has been updated. The October 2013 update contains around 100 additional individuals, 40 new families, 30 additional sources, as well as other minor changes. For a list of the most recent changes, please see the updates page.

I am regularly asked how to integrate ADAM into WordPress, as I have done on this website. I am not a web designer or WordPress expert (this was my first ever WordPress site) so much of what I did here was by trial and error, and may not necessarily be the best way of achieving a good end result. That said, judging by the number of requests I get for help, I must be doing something right!

These instructions are not meant to an exact step for step guide, they are just intended to give you the basic steps so that you can hopefully apply them to you own website.

These instructions will only work if you host your own WordPress site (i.e your site is NOT yoursite.wordpress.com). WordPress.com hosted sites do not , as far as I am aware, allow ftp access for uploading files. There may be alternative ways of getting the ADAM files into WordPress.com, but I have no experience of this. If you know how to do this in WordPress.com, please post a comment or let me know.

The tree data has been updated. The July 2013 update contains around 25 additional individuals, as well as other minor changes. For a list of the most recent changes, please see the updates page.

This update also contains images of source documents where available. These can be viewed on the source profile pages and are provided to assist researchers in making their own interpretations, and to verify the information contained within them. 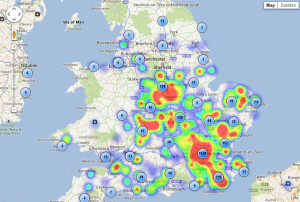 Thanks to the continuing excellent work of Tim Forsythe and his ‘Adam: The GEDCOM Family Tree Builder‘ web service, a population density map based on all the locations in the tree database, is now available to view. This is presented as a heat map and is fully interactive, allowing you to zoom in, move around, and display further details. Further information here.

The tree data has been updated. The June 2013 update contains various corrections and amendments, as well as around 150 additional individuals, and around 50 additional families. For a list of the most recent changes, please see the updates page.

There are also a couple of new features in this update.  It is now possible to view an ancestors list (by generation) for each person in the tree. This can be accessed from the ‘Ancestors List’ tab on the persons profile page. This update also adds in line client-side Google Maps on all Location pages.  Client-side Google Maps are those loaded at the time of page viewing. When you click on any location (be it an address, place, country etc) a map will automatically be loaded, centred on the selected location. You can zoom in or out, and move the map around.

Martin Gatward, born in Hackney 1859, was the son of George Gatward and Susan Jefferies. In 1878, Martin married 20 year old local girl, Elizabeth Victoria August at St Mary-le-Bow. Elizabeth was the daughter of Thomas August and Ann Jones. They had 5 years of marriage, bearing two children, George William, and Elizabeth Ann, before Elizabeth Victoria was struck down with the all too common wasting disease, Tuberculosis, dying at the tender age of 25. Martin no doubt took comfort and support from her family, in particular her younger sister, Ada August. This relationship developed and three years after the death of his first wife, Martin married his deceased wife’s younger sister Ada, with whom he had three further children, Alice, Ada, and Dorothy Ann.

No members of Ada’s family were listed as witnesses at the marriage, so it is not known if the marriage was with their blessing, but in the eyes of the law at the time, this was a forbidden and unlawful marriage! It is a matter of speculation if the marriage went ahead through ignorance of the law, deliberate deception, or collusion.

This marriage prohibition had derived from a doctrine of Canon Law whereby those who were connected by marriage were regarded as being related to each other in a way that made marriage between them improper. The Marriage Act 1835 hardened the law into an absolute prohibition (whilst, however, authorising any such marriages which had already taken place), so that such marriages could no longer take place in the United Kingdom and colonies, forcing those that could afford it, to marry abroad. For most of the nineteenth century, the question of whether a man should be able to marry the sister of his deceased wife engaged the English public in protracted and heated debate. However, it was to be nearly 50 years before the campaign for a change in the law was successful, despite the introduction of draft legislation in Parliament on many occasions. The ‘Deceased Wife’s Sister’s Marriage Act 1907‘ removed the prohibition (although it allowed individual clergy, if they chose, to refuse to conduct marriages which would previously have been prohibited).

So while it was acceptable to marry a cousin (courtesy of Henry VIII who changed the law to marry his cousin Catherine Howard) it was not possible until 1907 to legally marry a deceased wife’s sister!

This is a quick review of Adam: The GEDCOM Family Tree Builder, a free web service written and provided by Tim Forsythe.

There are no shortage of software applications that will take your family tree GEDCOM data file and turn it into hyper linked pages. I tried many of these out but none of them really gave me what I was looking for – clear presentation of information, ability to view information in different ways, simple display of source information, and the ability for me to host the web pages on my own website, ideally through WordPress. Adam offers all of this and more.

The process of creating the web pages is quite straightforward. Using the on screen prompts you upload your GEDCOM file, make various selections as to what options you would like to include (if you are not sure what to select, leave them at the defaults), and a few minutes after hitting the submit button you will have downloaded a ZIP file containing your custom web pages. Initially I had some issues getting these to integrate with my WordPress site correctly, but Tim Forsythe was extremely helpful in providing support to get this working.

One of the key features that set Adam apart is the ability to view your data in a number of different ways. This has allowed me to see where I may be missing or have incorrect facts, where I need to improve the reliability of my information, or where I have poor or inconsistent formatting of my data. It really does allow you to visualise your data in ways that conventional family tree software does not offer. Even if you don’t wish to publish your family tree data on-line  you can still use the web pages that Adam produces on your computer for offline viewing. All you need to do is download the ZIP file then open up the included index file and start exploring your data through your web browser.

The tree data pages on this website were all generated using Adam, so have a browse and see what you think for yourself.

Edward Gatward was probably born around 1770 in Essex, and would have married Mary Unknown in the 1790’s. They had at least three children, Edward (b:1798), Roger (b:1799), and Samuel (b:1801) who were all baptised at St Andrew’s Church, in Great Yeldham, Essex. I have hit a brick wall with this couple and would be interested in any information that may tell me: